Sometimes people ask where my ideas come from, and how my life tends to take such abrupt turns. Like, how did I end up in Florida? Well, this is a typical example of life according to Maria.

It started as so many other things do - curled up on the sofa in the evening, surrounded by dogs. 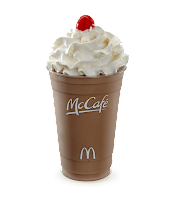 Hubs said, "I want a milkshake."

He doesn't ask for food-type things often, and since he has dropped weight to around 100 pounds, if he wants something and it's within my ability to make it appear, I'll get it.

He generally wants milk-shake from McDonalds. A good thing in his case since the the large contains as much calories as a nice dinner. I used to have them too until I read a medium vanilla milkshake from McDonalds has 670 calories. Those all sit around my waist and under my chin now, lol! Kind of makes me wonder what's really in them.

Anyway, on the way out of Mickey-Dees a police car zipped by faster than I've ever seen anyone drive on that road before. I saw a streak of blue light and didn't understand it had to be a police car until it was out of sight. Of course, this made my mind wonder where they might be going in such a hurry. My imagination painted out scenarios involving everything from bank robbers to invading aliens from a solar system far away.

My brain could probably have let go of this, but on the way home I also saw a Sheriff's car make a traffic stop, and two in a span of five minutes became too much for it. "Hmm, what if the guy in the car they stopped was really... and then... and then this happened..."

After typing away happily for about 15,000 words my writing pleasure came to a screeching halt. I realized how little I really know about the American police system, and what police officers in the US really do. Zombie-writer turned into zombie-researcher. Google had some interesting information, not to mention the city's police department, and the county's sheriff's office, and the next county's sheriff's office website with their virtual ride-along, and trust me, it's really easy to spend days on a thing like this.

By now I was into my research with heart and soul, wanting to know more. This is how I once ended up taking a college class in Astrobiology. At this point, whatever I'm writing on has become secondary to craving knowledge.

Back to the computer. While spending time on all these websites, a big and friendly button said, "Careers." One of the ads said, "Creative Communications Specialist."

There are many things I'm not qualified for and not interested in doing, but Creative Communications Specialist is right up my alley. I need a real job - I'm pretty tired of chasing people who don't pay their bills on time, meaning I can't pay my bills on time.

The seventeen page application looked intimidating, not to mention all required attachments and three pages to be notarized, but what better way to learn everything than to at least try? I'm a writer, I can fill out forms.

One page to sign said, "I consent to a polygraph examination."

That's probably meant to discourage people. My brain said, "Oh cool! I've never done that. Wonder if they look like they do on TV."

Hubs said, "Why would you want to do that?"

"Because I've never done it. Wonder if they'd let me take one even if I'm not chosen."

Of course I messed something up on the application; I wrote dates in European format as yyyy-mm-dd instead of American format, and needed to go over to the Sheriff's office to make corrections. The nice woman at HR sounded apologetic about calling me over, but I was ecstatic. Suddenly I had a reason to enter the building and see what it looks like on the inside!

Most people who come there probably don't bounce through the metal detector with wide eyes and a million questions and try to peek on the monitor when the officer X-rays their purse.

So far so good. They called me for an interview. Joy!

There's one question that will appear in every job interview in some form along the lines of, "Why do think you would be a good fit for this job," "Why do you want to work here," or "What about this work environment attracts you." I practiced all week, telling myself I would not say, "Because I'm a writer and this would be super helpful."

When the question came, all rehearsed answers disappeared from my brain and my mouth said, with enthusiasm, "Because I don't know anything about law enforcement in America, and working here would be a great way to learn." Yeah, that sounds reliable and professional. Nailed it...

Lucky for me, I had at least fairly relevant answers to all the other questions. They're interviewing several more people, so now I'm waiting and keeping my fingers crossed. Even if I don't get it, the process thus far has been super-interesting. (Pick me, pick me!)