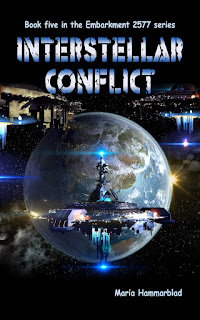 Running away rarely solves any problems, but that doesn’t prevent Alexandra from trying. Feeling sad and defeated, she doesn't care about the big picture with a galaxy on the brink of war, or about aliens taking over and controlling people’s minds. Her husband Adam hiding in a starship controlled by the enemy is a problem, but he went there willingly and she is determined not to care about that either.

Unfortunately, she may be able to run from home and family, but she can’t escape herself. And, turning her back to the world and its problems would be easier if her loved ones could refrain from throwing themselves in harm’s way.
at April 01, 2016