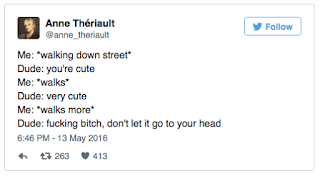 I ended up in an interesting discussion on Facebook. One of my friends - female - shared a blog post that included this screen dump of a tweet. My friend added the comment, "Your right to speak to me does not trump my right to feel safe."

Predictably, one if her friends - male - wrote, "You feel unsafe when someone says you're cute?"

No one answered him, probably a wise decision, but I was in one of those moods when it's hard to shut up. I had to comment, and leaned back to see what would happen. I know no one ever changed anyone's mind on Facebook, but sometimes you just have to, lol. 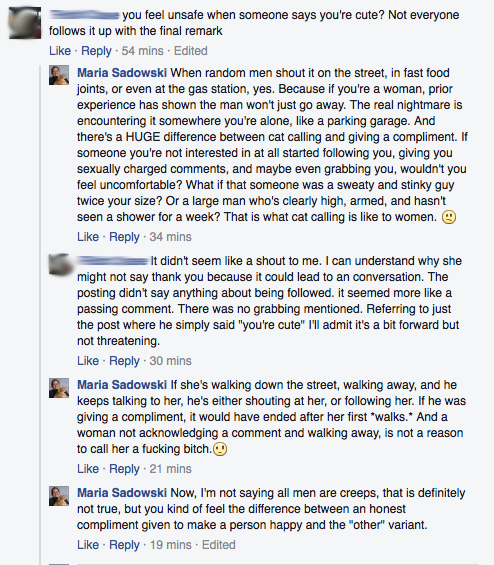 By now I am well over 40. Life has stacked up more than a fair share of problems, and the mirror shows a tired woman with silver in her hair and sagging boobs. The thing is, at this point in life, I don't care. I have other things on my mind.

A couple of weeks ago, I was dressed up and heading out to an event at work. I was going there to work, taking photos, and I stopped in a McDonalds drive-through on the way, thinking a cup of coffee would help keep me alert.

The young man in the window smiled and said, "Are you going somewhere? Because you look very beautiful."

That was a compliment, said without thought of getting something, and it made my day. I arrived to my event smiling, because he was so nice to me.

Cat calling is something completely different. A couple of weeks before the McDonalds compliment, I went to KFC on my way home from work.

There was a skinny man, sweaty, lacking most of his teeth. He fixed his eyes on me and said, "You wouldn't look bad if you took care of yourself."

I ignored him and another customer muttered, "Yeah, you're the one to say that."

He stepped closer. "I said, you wouldn't look bad if you took care of yourself."

Am I really supposed to be grateful for that sort of attention?

A lot of snarky comments came to mind, but I bit them all down and just muttered, "Right."

At that point, the people working in the restaurant asked him to leave. It became my turn, I ordered, paid, got my stuff, and headed for the door. Through the window I could see the man leaning against the wall right outside.

As a woman, you're well aware that men are stronger than you are. Even the small ones. I'm also well aware that I'm not good at running, so if he wanted to keep pushing, I wouldn't be able to get away from him.

One of the other customers - a man - got up from his meal and said, "I'll walk you to your car."

Of course I was grateful. He was probably tired too and had no reason to help me, except for being a good person. It still struck me as sad that as a woman, even in the year 2016, I'm still dependent on the protection of men. If I don't want to argue and don't want to fight, the certain way to be left alone is to walk next to a man.