When I started working at Cat Depot, a pretty white cat would greet me every morning, meowing until I entered his office. Once there, he'd sit on my lap and snuggle. Samson was my first Cat Depot crush, and I was unhappy when he was adopted. Though, I had only been there for a couple of weeks, and life went on. 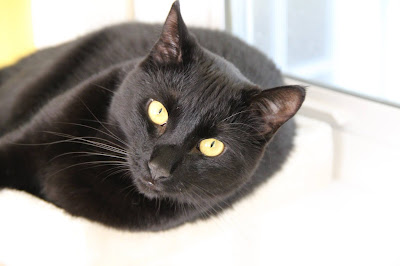 A pretty black cat in the same office took over the meowing and morning greeting, and he eventually became my cat: Koda.

I've heard many writers claim they need a cat to write. Seems to work the opposite way for me; I've rarely been so unproductive as after adopting Koda, but that's okay.

I digress. This is supposed to be about Samson.

For a couple of months after Samson's adoption, I kept my eyes on the cat database, just in case they brought him back. Nothing happened, and I assumed that everything went well. I had a nagging, unpleasant feeling, but time soothed it. After a couple of months, I stopped looking.

Imagine my surprise when one of my colleagues approached me a couple of weeks ago, saying, "Did you know that Samson is back?" 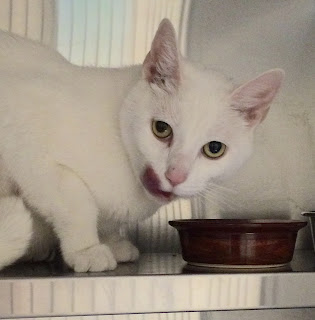 I did not know, but finding him only took a few seconds. He was in a cage in admittance, where they check the health of incoming kitties before they're ready to meet the public.

I pretend that he recognized me. He's a friendly cat who loves everyone, but I'm still pretending he recognizes me and that I'm special.

Be that as it may, Samson had developed a problem. A big problem: kidney stones.

Many forms of kidney stones in cats can be dissolved through diet. Samson's are of the kind that can't be dissolved. Of course.

He has so much kidney stones that they cause blockages and impair kidney function. I'm certainly not a vet - I'm barely qualified to put Band-Aids on humans - but it sounds like something that would hurt. 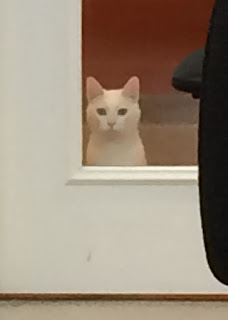 He was moved to an office, because moving around is better for him than sitting still in a cage. Probably more fun too. I offered fostering him while waiting for treatment, but our shelter vet said he's too sick. He needs to be close by so they can take samples and such.

It's kind of hard to work with that little face looking out at you. Isn't he adorable? Every morning when I come to work, he meows and meows until I go in and visit him.

Then, this happens. Cat on lap! 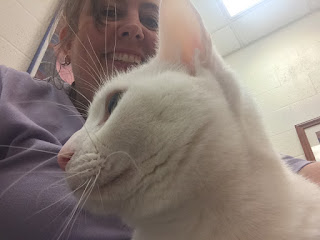 My friends at Cat Depot have informed me that without surgery, Samson will cross the Rainbow Bridge in not too long. Because everyone needs at least one kidney to survive. He has been to several specialists outside our own medical team, and the shelter vet is discussing with University of Florida. They are prepared to perform the life-saving procedures he needs, but estimate a cost of $5,500.

That's a lot of money.

I'm the grant person. If I can raise the money, Samson will have his surgery and live.

If I fail, well, let's not think too much about that. Failure is not an option.

If you want to help Samson get the long and happy life he deserves, there's a donation form here. Or, maybe you would please help share him with his link. Spread the word. Together, we can save Samson.

Is one shelter cat worth saving?

Is Samson worth saving?

This is the nicest, friendliest cat you can imagine. He greets visitors with a little meow, jumps up on their lap, and purrs, purrs, purrs with joy.