They shot my house!

When I bought my house and moved in around three years ago, this was one of the calmest areas in the city. It still would be if it wasn't for the teenage neighbors across the street. I have thought - and still think - they're pretty good kids at heart. They're just teenagers, and don't think the next step when they do something.

Like, if I leave the gate open, my dog will run out and I will lose it, having to go around the neighborhood calling for it at 2:30 in the morning, which will tick off all my neighbors who are sleeping.

You know, that kind of thing.

Lately they got a BB rifle. BB rifles are fun, I love shooting them myself. Though, since I've reached an age of well over 40 I realize that if I miss my target the BB will keep going and hit something further down the road. Thus, only fire airguns - and other weapons - in a secure area.

The neighbors haven't quite reached that level of awareness. Lately they've shot my car - I had to get a new windshield on Monday - and my house. There's a big hole in one of my office windows.

How do I know it was made by a BB?

Well, I found it.

How do I know they did it?

I've seen them with a BB rifle. No one else along the street plays with one.

Naturally, they're mostly out and about when I'm not, so I put a note on their fence asking them to please pretty please stop shooting in my direction and explaining that I can't afford to keep fixing stuff they break. Besides nuisances they're up to a mailbox, a tail light on my car, a windshield, and now a house window.

Yes, I did talk to the Sheriff's office too, and they started a file. I don't want to press charges against the kids just yet, I don't think going to juvie will make a thoughtless 15-year old or whatever age they might be any better, but the deputies did promise to put the neighborhood on their list for increased patrols. Hopefully things will calm down on their own.

Keeping fingers crossed for nothing more being destroyed, and for a calm 4th of July holiday.

Other weird stuff, this showed up in my yard the other day. It was on the lawn, packed in saran wrap.
I take it as evidence that more of my neighbors than just the kids are dingbat crazy. 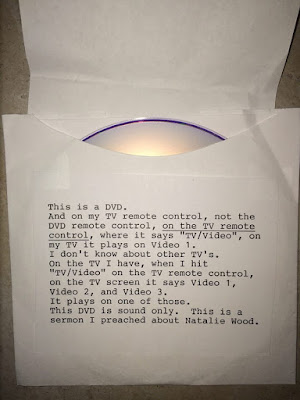 If you made a sermon you're so proud over that you want to spread it, maybe it would be a good idea to write who you are. I mean, how else will I know who to thank or follow or whatever? I guess it might be mentioned in the sermon, but I'm not putting that thing into my equipment. It could be anything.

It's probably completely harmless, an over enthused religious person preaching about Natalie Wood and whatever, but in an area where people shoot your house, better safe than sorry.
SaveSave
at June 29, 2016