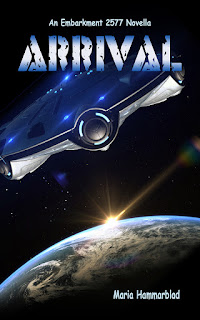 Readers of the Embarkment 2577 books may wonder how Alex ended up in the future, and what really happened. Now you can know: Arrival prequels the other books and gives the background story. It started like this:

Alexandra squinted up at the bright sky. Taking a day off from work to go to the beach had seemed an extravagant luxury, especially since it was March and the beach was a two-hour drive from her house, but it was the best idea she’d had for a while.

“So totally worth it.”

The weather gods favored her. The water was probably freezing, but the sand under her feet was hot and soft, and the sun made a splendid imitation of July. At times like this, living in the south was good.

An added bonus of going on a weekday in early spring: the place was deserted. It wouldn’t be once spring break started. She had lucked out.

Imma go around the bend over there, and come back this way. It’s about time to go on a quest for coffee.

Normal people might go look for a Starbucks, but going on a quest no matter how small had a much better ring to it. Knights and wizards went on quests while the mundane stayed at home. The search for coffee might not be as grand and romantic as Frodo bringing the ring to Mordor, but it would do.

A thundering noise from above forced its way into her thoughts. She had probably heard it all along and written it off as a plane, but it couldn’t be a plane. If it were, it was about to crash.

Hopefully, it would crash somewhere else.