Yesterday was national coming out day 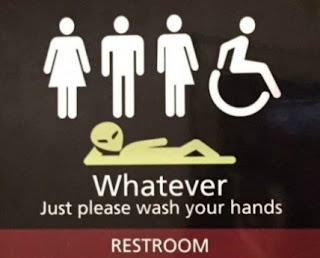 No, this isn't a post to tell you I'm not a straight female - I'm fairly sure I am. Many times through life I've thought it would be easier to be attracted to women, because men can be difficult, but it never happened.

It is a post to urge people to live and let live.

One can't generalize about a people as a whole, because we're all individuals, but I think the average Swede is better at putting things in a mental, "none-of-my-business" box than Americans are. I've met so many people in the USA trying to convert everyone else to their religion, condemning the way of life of the people next door, or even shunning their own children because they're different.

Over here, we're more likely to make up our minds, legislate, and move on.

Again, I'm not saying there aren't Americans who mind their own business, or Swedes who meddle - this is a gross generalization.

We decided that transgender persons should be able to change their legal gender in 1972, and legislated about legal protection for persons in a same-sex partnership in 1995. Gay people are welcome to get married in church.

I know two dogs - Border Collies - who got married in a church. Pretty sure many Americans would throw a fit over that one. We think it's cute.

By the way, did you know American anti-abortion organizations are trying to mess with our abortion friendly laws? Talk about being bad at sticking to your own business - Sweden is on another continent, and they still feel the urge to meddle.

I digress. I was going to talk about national coming out day.

The day made me think of the bathroom debate where Christian groups wanted to patrol public restrooms at Target to make sure everyone uses the right one. That in turn made me think of transgender people. I'm sure it's difficult enough in my culture where everyone uses the same bathroom, can't even imagine the struggle of living in a nation where people try to regulate where you pee.

Yes, I know bathrooms aren't the real issue, but they make a good example.

I was born a woman. I have lady parts and I identify with being a woman. Sweden is more equal than America, but there is still a gender gap. Imagine if the only way to catch up with male privilege was to change you gender.

Imagine if someone were to say, "We could surgically remove your breasts, and make you look like a man down there. Hormon treatments can make you grow facial hair and deepen your voice. That way, you can get the same salary as a man, have the same opportunities as a man, and be treated as fairly as a man. What do you mean you'd be uncomfortable? You just have to pretend. Be normal, as a man."

That would be pretty upsetting.

Some people are comfortable in their body, others are not. There's a wide spectrum of gender identities and sexualities. What's "normal" will depend on the person defining the word.

Can't we all just leave other people alone, and let them live their lives in a way that makes them happy?