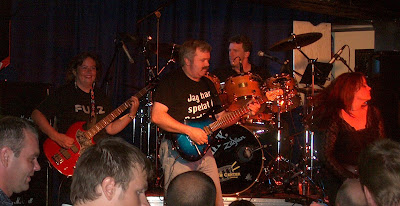 Once upon a time, yours truly was a musician. I played in several bands and it was a lot of fun. Hard work, but fun. This image is with the SSAB company band.

Most gigs were great. And, you spend so much time with the people you play with, they become family.

There were some places I swore I'd never go near again. There were a few gigs where drunks started to fight, one event where a guy stabbed another, and two or three times when people fell into the PA speakers, tipping the whole thing over me.

Common for all of them, the good and the bad, was my red bass. Her name is Yolei - after a character in Digimon. It was a long time ago, lol.

When I moved to the USA, I couldn't bring all my stuff with me. At the same time, my first husband wanted to keep the house, but wasn't able to buy me out. This seemed like a golden opportunity to solve two problems at once: we wrote a contract where the house would be considered his, he would pay for all costs associated with it, and in return for giving away my half, I would be able to store things in in.

In the long run this was a horrible idea, but I didn't know that at the time. 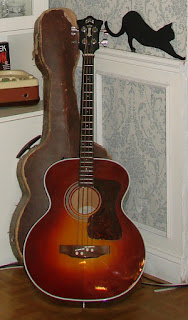 Anyway. I felt like my gig-gear was better off stored, but I would have liked to bring my acoustic Guild bass. It wasn't possible - she was far too large to go with me on the plane, and I didn't have the funds to buy her a seat of her own or send her over.

During the years things happened, and by the time I'd saved up money to have her shipped to me, I was told all my things were gone. Except for Yolei, who was allegedly stored at my mother's.

I was sad, but couldn't do anything about it. I looked forward to at least getting Yolei back. She should reasonably be safe at my mom's.

Of course, when I returned to Sweden, my mom didn't have a bass. I searched for Yolei online for a few months, but eventually I had to give up.

A few weeks ago, my first husband contacted me and confessed he had most of my things. He had them all along. Except for a few items that allegedly grew out feet and walked away with a person who came to the old house to pick up some shelves and sofas. 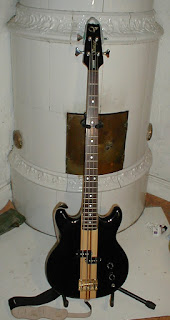 I would call that theft - especially since there were my things - and if the person who took them ever crosses my path, I will yell at him at great length. It won't bring one single item back, but yelling will give some satisfaction.

This bass, for instance, was taken. I used to play it tuned down to D. I also had a matching guitar which was actually my first instrument of my own - I bought it when I was 16. (Actually, all my electric guitars are gone. I assume the same person took them all.)

On the bright side, last weekend I got Yolei back. Joy!

And, I now have my amplifier, my pedals, and Yolei's siblings: Matt and Davies. Yes, they are also named after Digimon characters.

I also got my grandmother's guitar, and my cousin's guitar. The reasoning part of me realizes these items aren't really connected to the people, but they somehow are anyway...

My first husband still has the Guild, and doesn't want to part with it. Understandable - she's beautiful and has great timbre - but she's still mine and I need her. He also has a violin bass I bought at Jam in Stockholm many years ago. He would probably have let that one go, but I didn't think about it until I was half-way home.

I'm hoping both of them return to me with time. I doubt he has played on them more than three times during the past ten years, and maybe with time, he'll want to give them back. It happened with the other things, so it could happen with these too. Fingers and paws crossed!

I think my red bass missed me. I am so happy and grateful to have her back.