Zero Vision sounds like something interesting and futuristic, right? Or, maybe like someone stumbling about in the dark with zero vision.

I'm leaning towards the latter: in Sweden, the government has a vision of zero people killed in traffic.

The real number is about 250 every year - not a gigantic problem. But, traffic is their thing, and the focus is on speed. Probably because it's easy to measure. (I sometimes feel like it doesn't matter if you can see, hear, remember how to operate your vehicle, or even know what side of the road you're supposed to be on, as long as you drive slowly.) 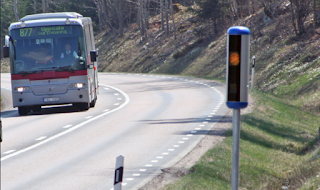 Late one evening a few months ago, I headed home from visiting my old home town and was caught by a speed camera. These are strange contraptions that line our roads. They're never, ever placed near crosswalks, schools, or similar where a crazy motorist could mow down pedestrians - they're more likely to be seen on wide roads where the speed limit is 55.

Anyway, I thought I was going approximately the right speed - an impression supported by all the cars in front of me passing the camera just fine, at the same speed. Then, the world turned white and I couldn't see shit. Literally; I couldn't see for several seconds and almost went off the road, because I couldn't see that there was a curve.

I grumbled, went home, and made a mental note, "Speed cameras are dangerous. Their flash was invented by an evil mastermind and may kill you."

After a couple of months, I got a pile of papers home with a photo of me in my car, asking if I confess to the crime.

I went about 5 mph too fast.

I wrote back, "Yeah, that's me." And added that there must be something wrong with the camera/flash, because they can't be intended to blind people like that. And, why did it only flash me? Seems unfair, lol.

About three weeks after that, there was a really thick envelope in the mailbox, explaining how my criminal act would now be forwarded to the DA, who may or may not want to see me in court.

I thought, "Whatever. It's 5 mph, it's not like I'm trying to overthrow the government. Send the ticket and get it over with."

Today, I got the ticket from the DA's office together with a pile of papers lecturing me on my crime and malicious intent.

This raises questions. Like, don't these people have anything better to do? Is this why we have such a low rate of solving real crime? And, how much did the administration of all this cost. Is it worth it?

Could we maybe spend some resources on solving the increasing problems with youth gangs in the cities instead?

I suspect it's easier to spend a few months lecturing me for driving 5 mph too fast.