I've been meaning to do a re-write of Kidnapped. It was my first book and my writing style has changed completely since then. I talked to my publisher about it a couple of years ago, and didn't get any further. Soon...


And then there was a TV show called "Better off Ted." I loved it. Few TV shows make me laugh, but this one was hilarious. Portia di Rossi played Veronica, manager at Veridian Dynamics. Her character is fantastic - and tickled my imagination enough to become Supreme Commander Veronica. 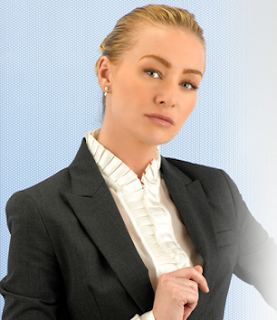 There are still Veridian Dynamics ads available on Youtube. In retrospect, they explain a lot more about Kidnapped than I thought at the time.

"Our team, over one hundred thousand strong. And we love all of them. Unless they cross us. Then we'll hunt them down and hurt them. Because that's love too."


Patricia also came from a TV show, but not one of mine. At this point in time, Mike - my late husband - watched "That 70s show" religiously. I don't like the show at all, but the actors' voices crept into my mind anyway. To this day, when I think of Patricia, she sounds like Mila Kunis.

Travis got his name from a kid in math class. I love the name. It's so... Not Swedish.

I do need to revisit them and brush off their story. Might not be this year - as quickly as time flies past it will be April 2019 before I know what happened, but soon. I have a half-written prequel too, telling Aaren's story before he became an outlaw.
at April 02, 2018 No comments: