I've never been interested in preserving foods. It has seemed super boring and superfluous - there's food in the store. This year, my subconscious has kicked in some weird nesting instinct.

A part of me in convinced the pets and I will starve this winter if I don't hoard food, grab everything in sight, and put it in jars. My smart brain cell knows this is silly, but somehow stupid brain cell persuades it we need more jars. 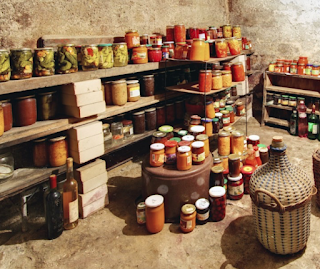 Stupid brain cell has even suggested taking the food cellar into use. That part of my brain claims it could look like this and be awesome. In reality, it's a crammed and creepy space with 5 ft ceiling height.

I'm a lot taller than 5 ft - the cellar seems created by and for a hobbit. I've never been in there, just peeked through the door. Still, stupid brain cell can be persuasive. Like, "If you don't want to use the one we have, how 'bout building a new one?" Because that's what we need.

Munching all this will be great during winter, but smart brain cell still thinks it's weird. Though, not weird enough to prevent looking up more recipes. What can I say - I do like to eat, lol.
at July 25, 2018