I started promising people the book was "almost done" a few years ago. It has remained "almost done" for an admirable amount of time. But now it's here, and it's called Anguish and Hope.

Will it be the last one? Not likely - these characters are active and they will want to appear in more books. But, now I have learned my lesson - I will not give a time frame.


Adam’s footsteps echoed through a long corridor.
Except for needing maintenance, the Palmetto wasn’t a bad ship, not really, but he still hated it.
He suppressed the emotions through an act of will. His crew should not know their android captain’s aversion to the ship or the mission, or to being there in the first place. He committed to this to help his wife save his father, and he would have to see it through. Even if it made him want to disassemble his own head.
Alex. The woman who sacrificed her life for him in the distant past: 2014. He brought her to his own time and world to save her, and for years they were inseparable. His affection for her was hardcoded with his base programming, a part of his mind that served much like the autonomic nervous system in a human. It contained things he knew and did without having to think about it. He put her there, not because she wanted him to or asked him to, but because he saw no other way to live. He needed her.
If Alex had been on the ship, he would have loved it. Now it was just one more obstacle that kept him from going home.
I should send her a message. Let her know I’m still alive.
He had intended to do so many times, but something always prevented it. If he hadn’t been so firmly rooted in logic, he would have thought the ship itself worked against him. It acted like a jealous lover who would rather sport an engine fire or mainframe breakdown than allow him to contact his wife.
Maybe he could get a message out if he did it right now, before anything else happened.
Running footsteps approached. “Captain, we have arrived at PB6524. There’s no sign of any technology or facility.”
That didn’t mean it wasn’t there. Though, it seemed unlikely on a planet so far out no one even bothered to name it.
“May I ask why you come running to tell me this instead of using the radio?”
At least the ensign had caught his breath.
Humans had so many funny expressions. He’d never seen a person reach out and actually catch their breath. Doing so wouldn’t be possible.
“Com system is down, Sir.”
Of course it was.

The books in the Embarkment 2577 series are:


The first four are novellas, also available in a collection volume: Embarkment 2577. It has gotten a new cover, courtesy of Juan Villar Padron. I love it - it looks like a movie poster! 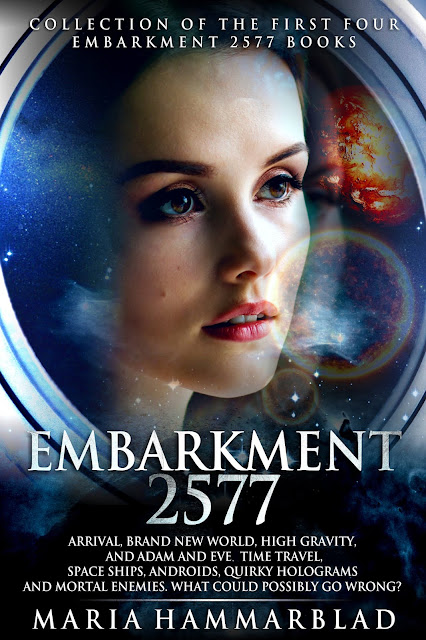