The thing about fighting evil? It keeps coming back.

As the sole survivor of a Taliban POW camp, Steve Petersen is damaged goods. He is convinced that he left his sanity within the horror-filled walls that held him captive for the better part of a year. His mind is trapped in moments of graphic, soul-crushing flashbacks, and his only solace is the momentary reprieve he gains from alcohol and drugs. 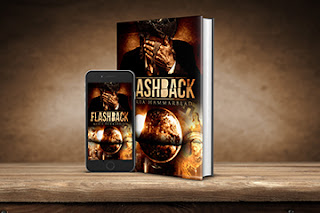 When he mysteriously wakes in a bright and cheery bedroom that belongs to a woman he barely remembers meeting, he knows he should leave. He should save the widow Anna from his own special brand of crazy. Leaving is not as easy as one would think, and he finds himself drawn into a world of real life problems such as folding laundry, and what to make for dinner.

This new way of life eases his need for drowning his pain in substances and offers moments of quiet healing – until Anna disappears. To save her, Steve must face the demons that have tortured him for so long and return to the place where it all began. Afghanistan.


Flashback has been previously released by Desert Breeze Publishing. The new, re-edited edition will be re-released on August 1st 2018. It is available for pre-order now.


Life outside could sure be exhausting. Anna went into the kitchen, and Steve rested his head back and closed his eyes. Listening to her hum a song, just a little out of tune as she loaded the coffee maker soothed his nerves.
A hard rattling sound made him open his eyes again.
Gunshots, and they were close.
Anna still sang, and she would be an easy target.
He ran through the apartment, making sure to stay away from the windows. Peeking around the corner, his beautiful fiancée was oblivious to the danger.
Women.
How did they survive?
He sprung out from his hiding place behind the wall, shoved her down on the floor, and threw himself over her. After all she did for him, protecting her with his own body was the least he could do.
Anna wheezed, clearly trying to draw a breath.
“Sssh, they’re coming.”
She lay on her back, and the question in her eyes was clear. Have you lost your mind? Of course he had, a long time ago. She should know.
When she opened her mouth, he covered it with his hand, so she couldn’t draw attention to them.
“Don’t you hear them? The shots?”
She shook her head and closed her fingers around his wrist, attempting to pull his hand away.
“I think we’re safe, but be very quiet.”