Time goes by so very quickly, and 2020 is the ten-year anniversary of the first release of Kidnapped. I'm currently on the final read-through of a complete re-edit that - in my opinion - makes the story flow a lot better. It will be available soon. And this time, I mean it, lol. I even have the new cover! 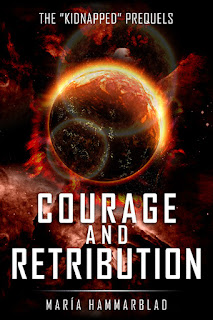 Anyway, there are three short story prequels to Kidnapped, and now all three are available for the first time. Courage and Retribution will be published on February 14, 2020, and can be preordered now!

It's a short read and the Kindle version is 99 cents, or free if you have Kindle Unlimited.

On the outskirts of the ever-present Alliance’s watchful eye, William Reynolds leads a good life as preacher and mayor for a small town. He pays little attention to the iron fist that runs the galaxy, and ignores rumors of a paranoid government using violence to keep its citizens in line.

The conflict between the Alliance and its people comes uncomfortably close as a family fleeing oppression seeks refuge in William’s basement. He agrees to help them, but the Alliance is on their heels, and reaching out to the people in need proves to be more dangerous than he could ever have anticipated. Once events are set in motion, there is no going back.

Aaren pressed the button to call the lift and grimaced when a display lit up, telling him he would be waiting for a while.

He considered taking the emergency stairs, some exercise would do him good, but the server central was located eighteen floors below his office. Even if he could jog his way up all those steps, he didn’t want to.

He crossed his arms over his chest and averted his eyes from the reflection in the metallic doors. His temples showed signs of silver and he couldn’t escape small wrinkles forming around his eyes. Soon he’d have to resort to chemicals and surgery to live up to the Alliance’s standard on a leader.

He had better things to do than meddle with his face.

Being head of IT security at the Alliance’s central bank was a prestigious job - and kept him much too busy to dilly dally with insignificant details like hair and wrinkles.

When he reached the floor that held his office, he decided he deserved a cup of tea to get through the morning’s pile of routine administration. There were no doubt heaps of forms to be filed. He should get an assistant to deal with all these tedious tasks, but working closely with someone would require incessant explanations and communication.

If he did it himself, it would be done right the first time.

He usually avoided the common areas. At lunch time, the break room would be filled with chattering, gossiping hens, but at this hour it might be empty.

Computers are so much easier to handle. Clean, logical, and easy to understand.

At first, he thought the room was deserted and exhaled with relief. Then, he spotted three people by the beverage dispenser. He recognized the all too talkative chief programmer and her assistant, but who was the third?

There shouldn’t be any new faces on his floor.

Berry was good at her job, as a programmer she almost surpassed even him, but she was oh so sociable. This was probably one of her cousins, or nieces, or other distant relatives.

Company security should not take a backseat to entertaining family.

Berry’s assistant winced at the curt question, but re-found his footing quickly.

“Sir, this is Jayda. She’s the new programmer.”

The girl was young, mid-twenties maybe, with cheerful eyes and her hair cut in a short bob. It was jet black, except for a bright blue stripe in her bangs. Her hair was at least two inches longer on the right than on the left.

If this was the fashion of the day, he must be getting old, indeed.

Berry giggled. He hated a woman her age giggling. It made her sound mentally challenged.

How could the woman talk and still giggle?

Jayda didn’t look intimidated at all. She flashed a smile so sincere it made him forget to be grumpy. Luckily, his communicator beeped before he accidentally showed himself human to his subordinates.

“Sir, this is the lobby. The Supreme Commander is here to see you.”

Exactly what he needed to make the day even better.

The guard’s voice had a slight tremble, and who could blame him. With any luck at all, the informal Alliance sovereign brought her favorite killing machine along.

Hopefully, he could get them out of the building before Murder and Mayhem became annoyed and destroyed something.