Kidnapped is back, and available for pre-order! 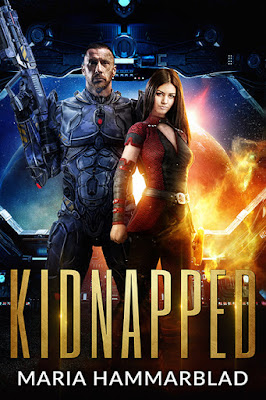 This year is the 10th anniversary of my first novel: Kidnapped. To celebrate, it has been re-edited and gotten a brand new cover from Deranged Doctor Design. It will be released on February 14, and it's available for pre-order now.

It's a late winter night when Patricia Risden heads home in her car, on a road she's driven many times before. She doesn't have a care in the world, that is, until a man appears from nowhere, right in front of her. The next thing she knows, she's a prisoner of the unscrupulous Alliance Commander Travis 152; an intimidating man who demands information and complete cooperation.

Travis soon realizes his mistake; Tricia doesn't know anything, and she is incapable of even getting a glass of water from the ship's computer. Infamous for being a ruthless executioner, conditioned since childhood to feel nothing besides fear and pain, he still deems her harmless, and finds enough pity for the lost young woman to let her out of the cell; a decision that will change both their lives forever.

A voice from his memory echoed in his head. It was his commanding officer snarling, “Such a pathetic little creature.”

He heard a woman’s scream, one of many imprints in his brain that would never go away, and his commander’s quiet laughter. Through the commotion in his mind, he could also hear the real but muffled sound of Patricia crying on the other side of the wall.

Shaking his head made the imagined noises go away, but the weeping was still there.

Would he be able to hear it everywhere in the ship?

He turned and entered the cell again.

Patricia lifted her face up and sniffled, “Don’t do what?”

“The thing with your eyes.”

“I’ll stop if you take me home. I didn’t do anything.” She was trying to shout at him, but her voice cracked, and he felt an unfamiliar twinge of sympathy.

He looked down at his gloved hand, flexing it, but couldn’t help seeing she was trying to dry her eyes. Probably too scared of him not to obey.

“Maybe I should just kill you. Since you’re useless.”

The threat didn’t seem to faze her, and he crouched down to be able to look into her eyes. “I can’t take you back. I’ve already reported in I’m bringing you. They’d kill us both.”

“So what? Now they’ll only kill me? Unless you do it first?”

Feisty. Admirable, but not a quality that will serve her well.

“No. You’re young and strong. You’ll be sent to some colony as labor. It could be worse.”

He rose up again and headed towards the door, and when he heard her voice call out for him this time, he did glance back over his shoulder.

“Can I have some more water?”

He surprised himself with flashing a smile.

“Figure out how to get it.”

Back on the bridge, Travis sunk down in his chair and stared straight ahead.

If she was still crying, he couldn’t hear it.

A holographic screen flickered on, showing Patricia sitting on the cell floor. He didn’t particularly want to look, but found it difficult to keep his eyes averted from the tiny, three-dimensional woman. He saw her get to her feet, approaching the wall where he got the water for her, muttering, “Figure out how to get it.”

He watched her without blinking as she made a couple of tries, finally got the terminal to appear and jumped around jubilant, displaying more energy than he could ever remember feeling.

After taking a sip, she paced around the cell, talking to herself.

“I have something now. The next time he comes in I can... I can jump him. Surprise him. He has a weapon I’m sure. I can take it and force him to take me home.”

After taking a long good look at the useless cup in her hand, she slumped and tossed it to the side. When she sunk down in a corner and started to cry again, Travis said, “Turn it off.”

The familiar voice of his computer echoed in the room.

“Why did you go down to her, Commander? You didn’t torture her.”

He looked at his hand in the black glove.

“You do your job and deal with the ship. I’ll do mine.”