Conscripted is turning into a short novel and will be ready soon. I haven't set a date yet, but my goal is to have it available before summer.

Since my hobby is kidnapping people and sending them to space, it will start something like this... 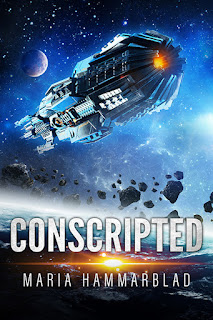 Viola stared at the uniformed man outside her door come to give her wonderful news. Not.

Yes, she was aware of her society being on the brink of war.

No, she did not feel that this related to her in any way.

War and peace were someone else’s problems. There were people paid to deal with all this. The United Planetary Systems might be a loose organization, but it was an organization with a fleet of starships, and if someone else wanted a piece of the action, whatever the action might be, professionals should take care of it.

The man didn’t even blink.

“You have the option to cooperate of your own free will. Pack what you need and come with me right now.”

Repeating the words didn’t faze him. He spoke into his collar.

“I will require an extraction team.”

“What? You require a what?”

She tried to pull the door closed, as if that could prevent them from just bringing her. He said, “It really is easier for you to come willingly, but it’s the same to me.”

His story about ten thousand civilians with suitable skills being drafted seemed preposterous. She was good with electronics and math. So were androids, and they would be much more useful on a starship.

“It’s not what you know, it’s what you have the potential to be.”

Had he read her mind? It didn’t seem likely, but in this day and age, who knew.

“That makes no sense.”

A shadow of a smile tugged at his lips.

“It doesn’t have to make sense right now. You will learn on the ship.”

“This is what all the surveys were about.”

There had been a lot of them, all sounding official, claiming to chart everything from government websites to woodland usage, and the statistical questions had seemed weirder and weirder.

Income bracket, highest education, would you fight to defend your family/home/planet?

Race, type of employment, are you interested in space exploration?

On their own, the questions seemed silly, but innocent. She had assumed they were to ascertain if people paid attention. Thinking back, the statistical questions must have been the real ones.

He looked suspicious, but she didn’t feel so good all of a sudden. Her heart raced and her legs wanted to fold. She took a step backwards and sat down on the little stool in the hall, the one where she sat while tying her shoes in winter.

Would she ever experience a winter again?

Would she ever see her home again?

She couldn’t look up to meet his eyes.

“The extraction team will be able to sedate you. You’ll be there before you know what happened.”

What is wrong with you? Anything would be preferable to following a person with so little empathy. She folded her hands on her lap to keep them from shaking.

“You’re going to run out the back, aren’t you?”

Email ThisBlogThis!Share to TwitterShare to FacebookShare to Pinterest
Labels: books, my books, writing