Right now, people all around the world have something in common: we all watch and discuss the development of the Novel Coronavirus 19 development. Everyone and their pets have opinions. Some are panicking, others feel it's like worrying about a common cold.

As a science fiction writer, I'm obviously an expert on viruses. (LOL!) 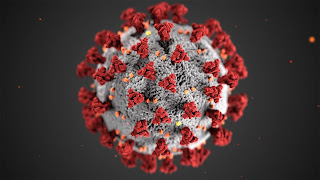 First and most important, like Douglas Adams said: Don't Panic!

Panicking rarely leads to good results, whether a situation is real or imagined.

Now when we have that out of the way...

Covid 19 is not a common cold, or even a flu. I think people make this comparison because the symptoms resemble a cold or a flu, but that's like comparing brain cancer to a hangover because both can give you a headache. A symptom is not the same thing as the disease causing it.

2. What does this mean for me?

During the past week or so, I've heard a LOT of people claim Covid 19 isn't a threat to society because the death rates are fairly low. As this is written, Italy has the highest recorded death rates with around 4.5% and WHO estimates an average death rate of 3.4%.

First of all, the death rate isn't the only thing that determines whether an outbreak will cause disruptions in daily life. One of the problems with a brand new disease is that a lot of people will be sick at the same time.

How many will be infected in a major outbreak depends on the type of community and precautions taken, and there will be differences between professions and lifestyles. Let's assume an average of 25%, just so we have a number for the examples.

That would mean 1 out of 4 police cars are now standing still. 1 out of 4 firefighters are sick and can't help you if there's a fire. 1 out of 4 EMTs won't be there for emergencies. 1 out of 4 truck drivers aren't delivering goods, and 1 out of 4 farmers aren't producing food.

The hospitals would be bogged down with people in need of help, because the healthcare system isn't constructed for so many people being sick at the same time.

This is why it's important to stop the outbreak before it grows any further.

Pay attention to what actual representatives from the CDC or similar organizations in your country are saying. That is not the same thing as listening to your friends on Facebook, listening to a politician, or listening to the president.

Which leads me to:


Wash your hands, take reasonable precautions, and use common sense.