2020 won't be a year for trick-or-treating. Not a year for knocking on people's doors. I'm still putting some decorations up, and we're preparing for an event at my local cat rescue. It will be a ghost path through the woods, so it's outdoors and people can keep their distance to each other. Not the same as trick-or-treating, but a reasonable substitute.

One of my pumpkin vines gave a mini pumpkin. They're called "Baby Boo" and SO cute! I gave it to the dragon who sleeps in my bookshelf. If ze ever wakes up, the pumpkin will be a great snack!

Have a safe and wonderful holiday when it arrives. Live Long and Prosper! (Okay, maybe a little corny, but sounds cooler than saying "I hope you don't catch the virus.") 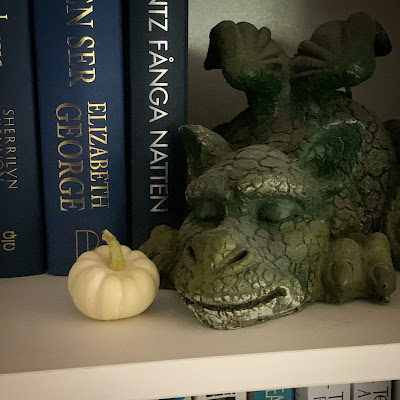