There's a cottage about a mile from my house that I've passed so many times when exploring with the dogs. It has looked increasingly dilapidated, obviously empty, and one day when the dogs wanted to explore the path to it I just followed them. Okay, that isn't entirely true; I may have encouraged them. 😆 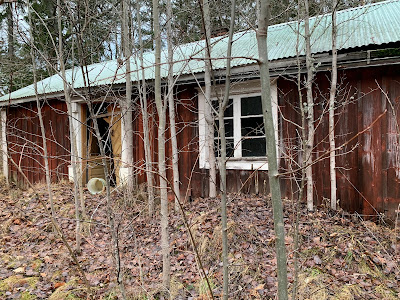 A couple days later, curiosity got the better of me. I went back and snuck inside. At some point in time, someone must have kicked the door in. 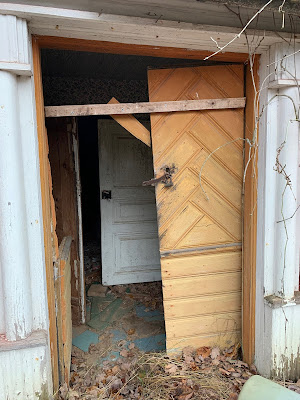 This used to be a kitchen wood stove. The actual iron stove is tossed out in the back yard. Why anyone would bother with pulling it out and putting it outside is a mystery to me - it has to weigh a couple hundred pounds. 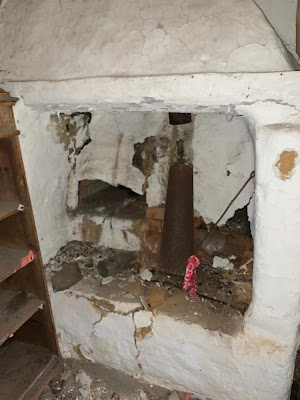 The rest of the kitchen is also ruined. These photos are from December, and since then someone has shot at the covering of this window. What is it with people and wanting to destroy things? 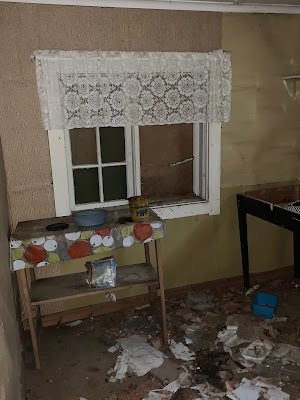 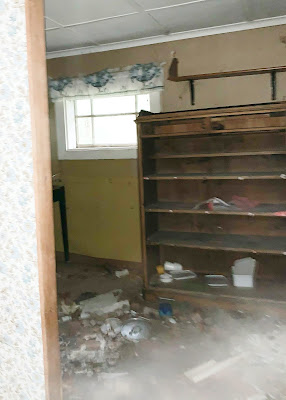 There are two rooms besides the kitchen. One is tiny and more of a storage area, and the larger one is in poor shape. I don't know what happened to the floor in here, but it can't have been good. I mean, the wood obviously rotted, but that doesn't explain the hole. 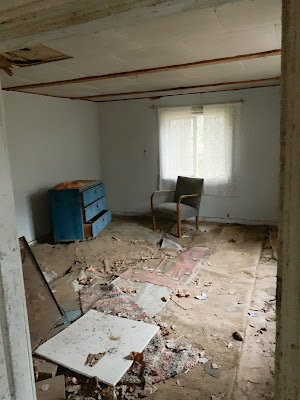 Imagine how proud that stove must have looked once upon a time! 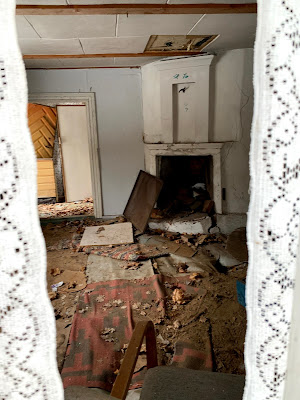 There are mysteries in the yard too. Like, what the heck is that? 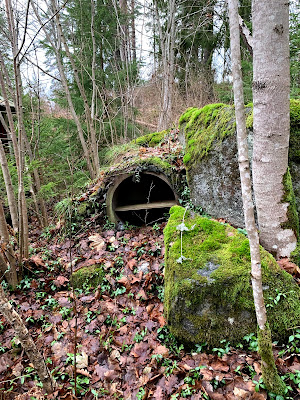 Anyway, the place kept calling out to me. I posted about it on Facebook and one of my neighbors said no one has lived there for at least 40 years. At that time an older couple used it as a vacation home.

I looked it up on a property map and it's a part of a gigantic forest lot. The owners live in another city. Just before Christmas I gathered courage and reached out. The person I talked to confirmed that it has been empty for all that time, and said they keep trying to board it up, but people seem dead set on destroying it.

I feel compelled to try to save it. This little house has been through a lot, and it's still standing. That says something - I'm not sure a modern house would look this whole after 40 years on its own. So the owners and I have come to an agreement. We're making a contract to show I have the right to be there - and that way I can call the police if the people who shot at it come back. I'm going to try to fix it up.

Carpentry is not on my list of skills, but this is a small and friendly building to practice on. I am good at painting and yard work, so that's two out of three... And it's okay if it takes time. I'm super excited to get going, and I am so happy the owners and I are thinking along the same lines.

Now, here's the comical part: I want to save this for the sake of saving it. To me, it is something worth doing.

Maybe I will use it as a creative retreat - a place to go to write, read, or just sit in nature. Or maybe there's a future where a family from a city has this as a much needed escape to get into the countryside. Maybe children will play in the yard one day, and maybe I'll drive by and wave, delighted because I helped make it possible.

I joined a Facebook group about saving old houses and posted photos of this project. Within five minutes I had 26 comments telling me what a horrible idea this is, and people were still typing. It was all along the lines of, "Why would you do a thing like this when you don't own it? You can't make any money on that. And what if they sell it to someone else? Are the owners at least paying you? What do you mean you're doing it because you want to do it? How can you profit from a thing like this?"

On top of that a guy was mansplaining how I will need heavy machinery to dig out around the house and the yard, and lift the building to make sure it becomes straight. Okay then...

I felt like I was talking to a bunch of Ferengi. I tried to explain, but that got old quickly, so I deleted my post and left the group. This isn't about making money; it's about saving something. Doing it can benefit both me and the community.

I don't have to own everything. There might be a point in the future where I ask the owners if they're interested in selling to me, but it's much more likely that I think this is a super fun project until the house is whole and pretty. I love the process of making things whole and pretty. Once that's done I usually need something new to work on.

We'll see. Right now I am excited, and the Ferengi among us will not steal my joy.

Now I just need the snow to go away. So I can get there with my car, and start taking the shrubs down, and, and, and... I'll keep you posted!