Kårtäkt - yes, that is the name of a Swedish village

Someone asked why I'm so fascinated with old houses. I wasn't aware of it at the time, but it started in this cottage, back in the 1970s. It's very old, located in a tiny village named Kårtäkt. 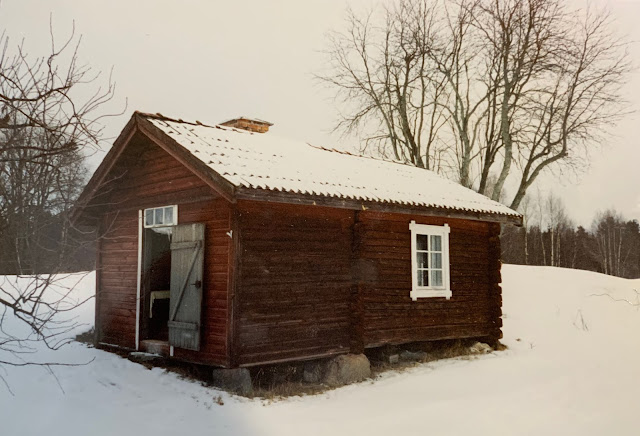 When I was a little girl, the cottage was called "Hildurs Kammare" - Hildur was the woman who owned it, and "kammare" is short for "Slåtterkammare," which means a cottage that was used during harvest season. Her last name might have been Sundin, I think Hildur Sundin sounds right, but don't put any money on it.

There was a crumbling cellar behind it, and a barn where the cows and such used to have shelter during summers. I haven't been here for decades, but I bet both cottage and barn are still there. I don't know exactly how old they are, but a couple hundred years at least.

Anyway, Hildur was the lady who rented it to my parents. She was very old and super nice, and we went to see her once a year to pay the annual rent. Going there was exciting, but also a bit terrifying. She had a huge house she didn't live in and a one-room cottage in the same yard that she did live in. She also had a farmhand who used to drive around on an ancient moped. He was always drunk.

I was so small when I last saw her I don't remember many details. She eventually sold "our" cottage and surrounding fields to a nearby farmer. Visiting them to pay the rent wasn't anywhere near as exciting.

There was one room and a hall, and it was smack in the middle of nowhere. No water, the well had gone dry a long time before we got there, so we brought that from the city. No electricity. Mom would keep a fire going in the open fireplace and cook over the open flames. She was very good at it - and I learned to make fires when I was like 7. I can still see her crouch in front of it, stirring the fire to make it just right. All this was in an era long before cell phones and other types of entertainment, so if you wanted something to do, you'd better have brought a book.

It was also in an age before digital cameras, so I don't have a lot of photos. 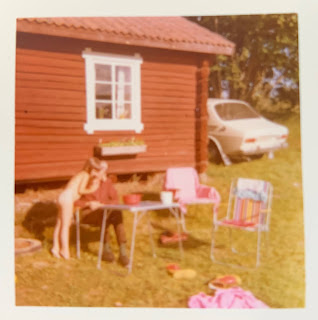 Down the road was a farm, and with a little luck they would have cows or horses out on pasture. There were two other children in the vicinity, both older than I. A boy who had a birth defect so he was in a wheelchair - those were big and clunky things in the 1970s - and a girl who had a horse. I can't remember her name, but the horse's name was Salván. (Typical me, remembering the name of the horse and not her...) He was a Norwegian Fjord Horse and sometimes when I was really lucky she brought him down to us so I could pet him.

Other friends included the neighbor's cat and a moose. My dad was terrified of moose, so he didn't approve of the company I kept. But seriously - there was nothing there except for the animals in the forest!

All this was okay as long as I was a child, but frustration and boredom grew with age, and as a teen I loathed being there. My mom and dad eventually got divorced (that was a relief, actually) and mom kept the cottage. She had it up to the mid 2000s - over 30 years! Around that time my aunt got cancer and it was the last straw for my mom. She didn't want to do anything after my aunt passed, and not even the cottage was any fun. I think the owner's daughter wanted it too and mom was probably happy that someone else would care for it.

I pretty much grew up here - we were here all spring, summer, and fall every year. Apparently winters too since it's winter on the photo, but I don't remember that. And I guess this is why I have such a fascination with small, old, red off-grid houses.

They represent innocence and the freedom of childhood. Nostalgia, peace, and a simple way of life that isn't possible today. And they must be protected.