This past weekend, the dogs and I went for a road trip and ended up by an old cottage where the the map claimed there would be interesting things to see. There was; I found some really cool super-old rock walls and piles of rocks that are allegedly Iron Age graves.

Yearning to learn more, I found this interesting anecdote in an archive, but I don't know what year this would have happened. (Translation below) 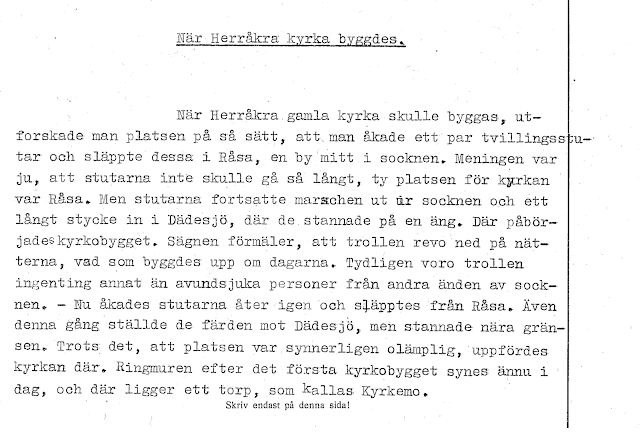 When Herråkra Church was to be built, the people attempted to find the perfect spot through letting twin oxen out in the village of Råsa. They intended for the church to be in Råsa, since this was in the center of the parish, and assumed the oxen wouldn't go very far.

However, they walked into a neighboring parish and eventually stopped in a meadow. This was where the church would have to be built. According to local lore, trolls came by every night to tear down what was built during the days, but the "trolls" were probably just jealous people from another part of the parish.

As the construction failed, the twin oxen were called upon once again, and were once again released in Råsa. They headed in the same direction as last time, but didn't go as far. This time they stopped just on the border to the other parish. This wasn't a good spot for a church, but they built it anyway.

The outer rock wall from the first build still remains today, and nearby is a croft called Kyrkemo.

I saw the wall intended to surround the first church, and it's really cool. Photos don't do it justice. 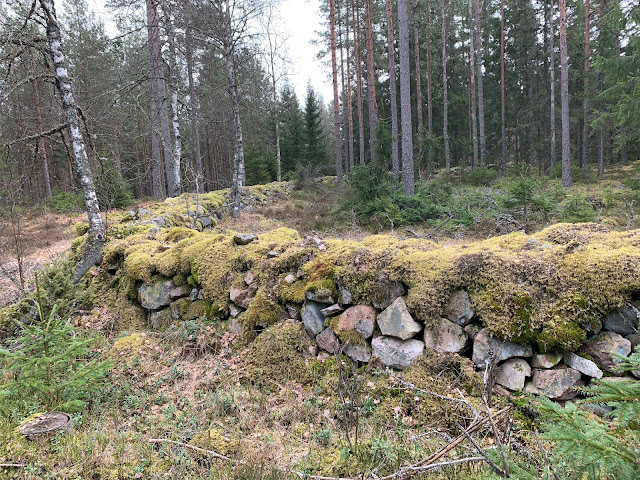 By now inquiring minds may wonder, what does this have to do with Possible Project Cottage II?

Well, the cottage named Kyrkemo is still there. It looked abandoned, so there was a 0% chance I wouldn't approach and at least walk around it. 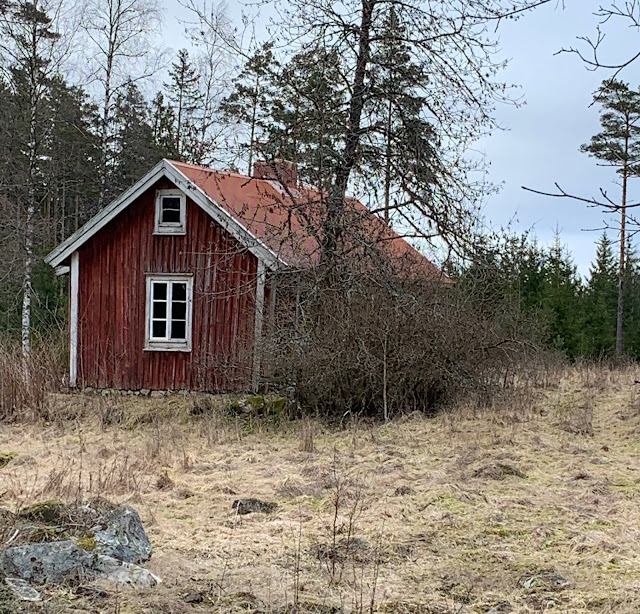 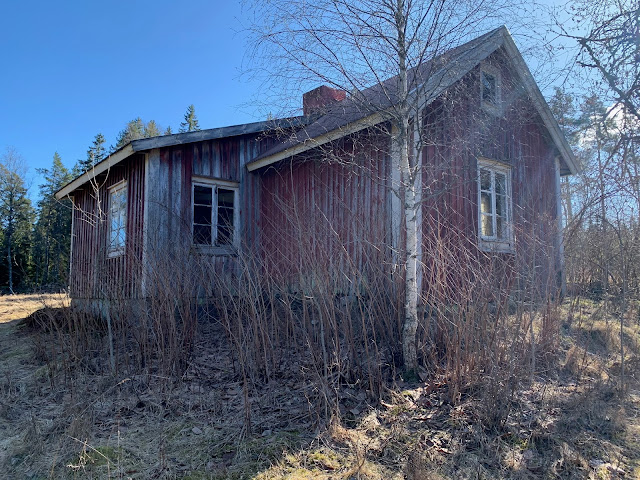 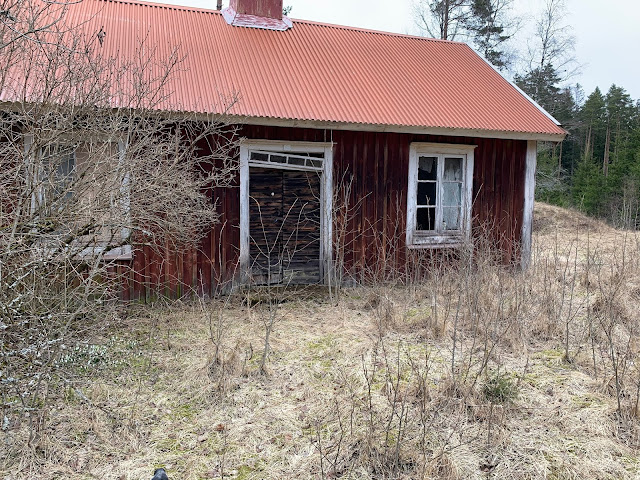 It looks like an average forgotten Swedish house - but someone has cared enough to make sure it has a functional roof, and boarded up a broken window.
But, in the back, the door is just... very sad. I suspect someone has broken in and torn it off - seems stupid since there isn't a lock on the front door, but petty criminals may not think that far. 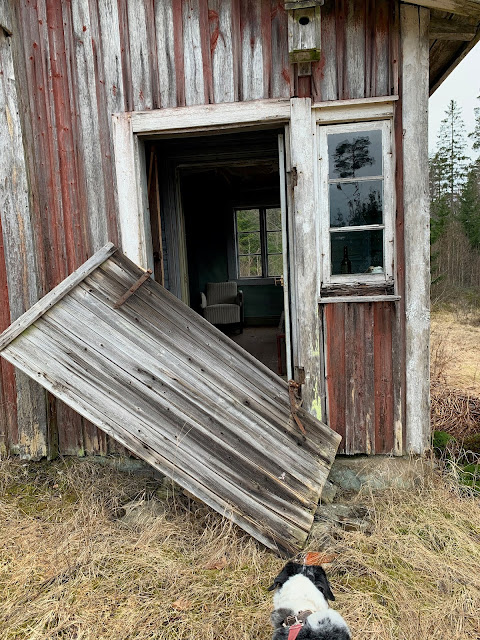 This sign hangs above the front door and if it's accurate, the oldest parts of the cottage are from 1772. That's older than the USA! I contacted the organization who put it up to ask if they know more, have old photos, or something like that. Keeping paws crossed for a reply. 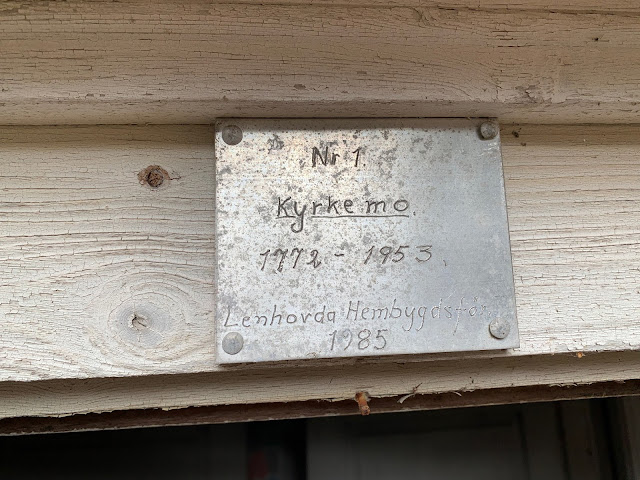 I thought that if it were my cottage and I had bothered with giving it a new roof, I'd want to know if the door was missing. It isn't in an area where people would drive by just like that, so unless the owners made a point of going to it, they might not find out for years.
I went home and looked up the owner. Turns out this is a part of a gigantic forest lot, belonging to an organization that owns immense amounts of Swedish forests. My stubborn brain cell claimed they might still want to know about the door, so I e-mailed them.
Monday morning, customer service responded and said they'd forwarded my message in the organization. An hour or so later, a person wrote a kind message, saying they would check it out. This could have been the end of the story, but he reached out again yesterday, asking if I would be interesting in purchasing the cottage.
Brain cell Smarty said, "This is a HUGE amount of work, and we have other things to do. Count on two years before it's usable."
Brain cells Dumby and Worky teamed up. "A building from 1772 is worth preserving. It's a part of our cultural heritage and do you really think someone else will do it if we don't?"
I will meet him there next week for an evaluation of the cottage and to see what we can do. If the price is within reason and something I can manage, I will purchase it. The government has hoops to jump through - and fees around $6K - to split a lot of land, but this organization must be one of the largest land owners in the nation, so they may have a shortcut. Or, it might be possible to purchase the cottage and have a rental contract for the land.
We'll see how all this turns out. No matter what happens, it's an interesting experience. And if it's meant to be, it could be mine!