I think I've said this before, but renovating and rescuing an old cottage would be a lot easier if people would stop destroying it on purpose. I went to Project Cottage yesterday, driven by a nagging feeling that something was wrong, and someone has shot every single windowpane. All of them. 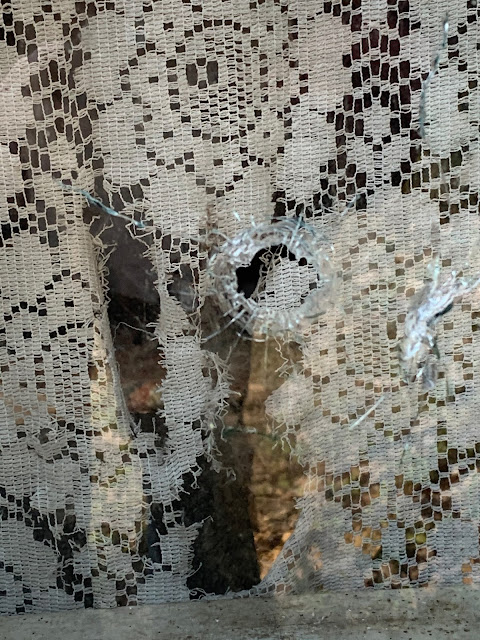 Right now I am angry, frustrated, sad, furious... It hit me really hard, because it brought me back to when I lived in Bradenton and the gang shot my house. I slept with a 9 mm Walther next to my pillow for a year, until I was able to leave and come here. I chose this village because it's tiny and should be fairly peaceful.

How wrong one can be!

I loved this window in particular, because it had six panes of beautiful hand-blown 19th century glass. Replacing it with the same quality would cost $392 per pane. So $2,352 to get new glass for the whole window.

I'm guessing the culprit is a young man, probably a teenager, and they probably think it's super cool when the weapon goes bang and the glass crackles. It probably makes them feel strong and awesome. But you know what? Right now, it's a matter of material damage. Expensive material damage since they've destroyed a total of 21 window panes, but still material. What if someone had been in there? How super cool would it be to face charges for a murder attempt?

This is the second time someone has shot this poor cottage since December. I've ordered a security camera with a 4G SIM card and signs saying, "STOP SHOOTING THE HOUSE! I'VE PUT UP CAMERAS!" I've also whined on Facebook, hoping someone who knows the culprit will see, and a local newspaper saw my post and picked up the story.

I'm filing a police report too, but I'm holding off with sending it in until I've gotten in touch with the property owners.