Project Cottage II is back on! Woohoo!

I did a lot of thinking during the Easter holiday, visited properties for sale, and even made a budget spreadsheet to figure out how far I would find it reasonable to go to purchase the 18th century cottage. Aaaaand, when the seller's representative got back to me after the holiday, we were able to come to a mutually acceptable agreement. Woohoo!

(If you haven't followed my blog, you're probably wondering why I have a Project Cottage and a Project Cottage II. I don't own the first one, I just have an agreement with the owner, because seeing something beautiful a mere two miles from my house slowly die bugged me.)

Anyway, they're drawing up the contract and I'm keeping my fingers and toes crossed for working it out financially. I don't have a "great" credit rating, but it's "good" so hopefully that will be enough to borrow what's needed.

I went out there before work today with the dogs to try to fix the door that has fallen off, and almost got lost in the woods. I was completely certain that we were right behind the house, but also completely certain I'd never seen a forest looking like that before, so I was about to pull out the phone and check the map when I spotted the roof through the trees. We weren't far off, but a few hundred meters north of where I thought we would be. That has never happened to me before, guess there's a first time for everything.

Though, I've always had a funky feeling in the woods over there, and they're littered with Iron Age grave sites and similar. So who knows, maybe something is messing with my internal compass.

Anyway, the first attempt at fixing the door failed spectacularly. It weighs a ton. It's way too heavy for me to lift and hold. 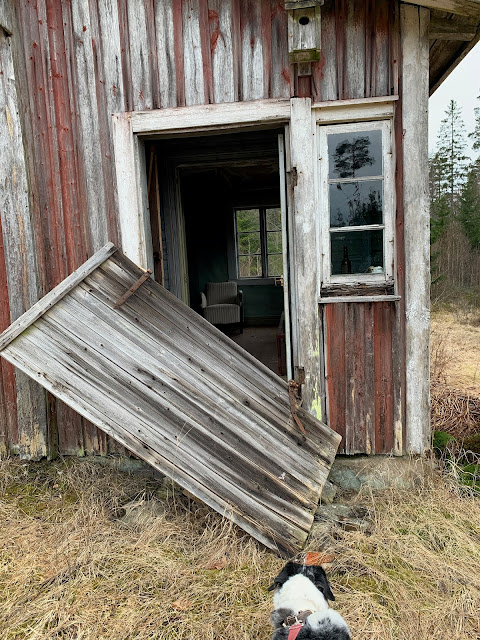 I managed to slide it up and wedge it in the opening so the house isn't completely open to weather and nature - I half expect to meet a deer in there - but it definitely didn't work out like in my imagination. 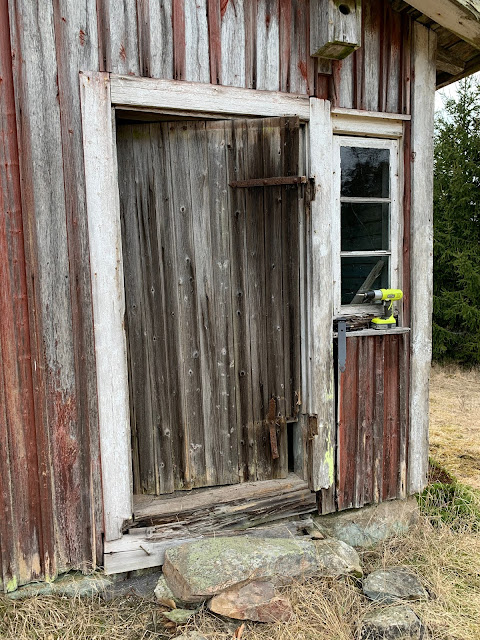 I have to rethink this strategy, and I'm pondering several options. I can try to build something up that I can slide/push the door onto, so it sits at the right height and I can attach it to the frame.

Or, get another door, but I like this one because it's really old. It's probably a bit newer than the oldest portions of the house, but still old. I have a spare door down in my shed. If it fits I'll take it as a sign.

Or, I could build another door. I don't know why I think that's a great idea when I have not just one but two doors and one of them is supposed to be there, but my imagination is still in overdrive.

Or, once the house becomes mine I could board the opening up until I get to renovating this side and put in a French Door with windows. That would be SO wrong for the period, but it would probably also look gorgeous.

Looking at this photo feels like a good time to point out that we don't have termites in Sweden. Otherwise I would be concerned about them. The siding looks ratty, but there's a solid log structure behind it. I haven't decided yet if I'm going to just replace the siding or save as much of it as possible.