Do you ever have the feeling you went to bed in the normal world and woke in a strange parallel universe? The world is almost the same as the one you left, almost what you expect it to be, but not quite right?

That's me this morning. I got a hint yesterday of something being wrong, but didn't get it. I was putting my tools in the car to go to "Project Cottage" and saw the police in the neighbor's yard. They all looked very serious, and I assumed there had been a burglary or something. The officers left before I was done, so I moseyed over to ask if everything was alright, and offer my help in case it wasn't. My neighbor said "I don't think I'm supposed to talk about it, but I am fine" - and I should have listened to the emphasis on I.

I woke up to the news that the neighbor in the next house is dead. He was a great guy, one of the first to welcome me to the village and always kind and helpful. He would get my mail delivered to him by accident and come over with it - he sometimes even got text messages from UPS that were for me - he always had a kind word, a smile, and a wave as he drove by the house. Sometimes in winter, I'd come home and he had shoveled my driveway!

My brain keeps presenting useless objections like, "But he was so young," "I just saw him," and "But he has a family, small children" and "But his van is there."

Of course, these objections - while true - have no impact on today's reality. He is gone, and the world is a darker place without him.

I promised everyone I wouldn't disappear again and that I would at least keep blogging, and then life happened. And being 2021, it has posed challenges.

One of my cats, dear sweet Adam, got a problem with an eye. I took him to the vet, thinking he would need some eye drops or something, and they said they had to take the eye out. I wasn't too worried about it - he was blind anyway and wouldn't miss it - but one thing lead to another and a week later he was gone.

That was rough, and sad, and still makes me cry.

To make a difficult time even more challenging, the insurance company refused to pay, because he was blind. I argued it had no impact on getting an eye infection and all the other things that happened, but they didn't believe me, and I borrowed thousands of dollars to pay for all this. A friend in the USA ended up paying for his surgeries. I can't put words to how much it means to have such good people in my life!

Just as I was recovering from this - emotionally and financially - there was an extra $180 charge on my Wells Fargo debit card. They canceled the card, which was the right thing to do, but that also started a whole chain of fiscally difficult events. Because now I didn't have a card and checks aren't a valid form of payment in Sweden. Everything that was automatically charged to the card got a hickup - and I didn't have another way to pay bills in the USA. I for instance still have my car in storage in Bradenton.

Ever since Covid started, the mail service between us and the USA has been iffy, and it took over a month for the new card to get to me. While waiting for it, I made a tactical error. I decided to use PayPal to swiftly transfer funds to my Swedish bank account, so I could pay everyone.

I'm guessing something went wrong with the account number and someone else got my $1,700. PayPal refuses to tell me the entire account number to which the funds were transferred - it has been two months of excuses to why they can't/won't do that - and they love referring me to the bank's customer service. The bank's customer service say they can't do anything to investigate and that I have to talk to PayPal.

I reported PayPal to the Swedish Finance Inspection and they forwarded me to an inspection in Luxembourg where PayPal Sweden's head office is. From there I got a complaint address to PayPal in Luxembourg and they have until July 31st to respond. I doubt they'll get back to me and I will have to move forward with the complaint. Ugh!

Of course, losing all that money made me fall behind on my bills, and saying "I can't pay you right now because PayPal lost my paycheck" sounds like a really lame excuse.

All these financial problems obviously didn't fill the void from losing Adam. I adopted another cat. His name is Love - it's an actual name in Swedish, pronounced like Louvah - and he is the cutest. Though, my brain had a glitch. I read on his sign that he was only eight months old and since I work with animals I should know an eight-month-old cat is still a kitten. Nope, didn't think of that. 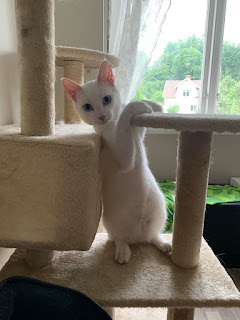 I have brought an eight-month-old terrorist with teeth and claws into the house. He has the face of an angel and thinks biting the dogs is the most fun thing ever. He is also deaf, which complicates explaining what isn't acceptable.

He kind of gets along with the dogs anyway, just because they are so patient. I've tried to do a slow introduction between him and Koda, and while they weren't immediately loving each other, I thought it would work.

And then, he put his teeth into Koda's tail.

At first I didn't think it was all that bad, but once we got to the vet and Koda had his behind shaved and was all stitched up, it looked like Love almost bit his tail off. It was really bad.

So now Koda is in his room with a cone on his head, eating antibiotics and painkillers, and I have no idea how these two are ever to be friends. And there are few more hundred dollars in vet bills, while the PayPal funds are still missing...

And these are just the big obstacles. It has been a challenging spring and summer. Hopefully, things will be easier from here...