Whose car is that?

I consider myself at least normally intelligent; I even like to believe I'm smart. However, some instincts run so deep they're near impossible to get rid of.

For instance, I have a black SUV. The car before this one was also a black SUV. Thus my brain accepts that there is and should be a black SUV in my yard. The current one is a Chevy and the old was a Peugeot, but they look the same.

About a week and a half ago, said black SUV had a flat tire. On a Sunday, so everything was closed. I don't have a spare and even if I did, it wouldn't do me any good - I have a bum hand and I can't fix things like this.

This was just one in a long row of automotive mishaps, and where I live, there aren't many options besides "use the car." I can walk, but everything's too far away - it would take me at least eight hours to walk to the city. I don't have the stamina, will power, or time to attempt a thing like that. There are buses, but not in abundance - maybe four a day. We don't have a taxi service and there is no Uber. And, asking neighbors for help gets old quickly.

To make matters worse, I had an important appointment that I needed to keep Monday morning: a land survey at my cottage. 60 kilometers (37 miles) away - definitely not walking distance.

I was looking online to see if I could rent a vehicle - I knew there's no one close by, but thought maybe someone would deliver a rental, but this too was a bust.

I've had a lot of car problems lately and I've thought of getting a back-up vehicle. I went to "Blocket" - it's kind of like Craigslist - and the first thing that came up was a pretty, blue, tiny Kia. At a dealership and in my price range - and the ad said "may show on Sundays with appointment." 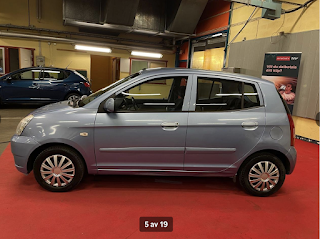 Though, it was 30 kilometers (19 miles) away. The bus schedule rolled on the floor laughing when I looked for public transportation, and the neighboring houses were dark. No rides. The Kia could just as well have been on the moon.

The very nice owner brought the car to me, even though it was Sunday. I got to my appointment on Monday morning. Almost didn't make it back - the wheels got stuck in the mud - but the tiny but mighty South Korean vehicle was able to free itself.

Tuesday morning, the Chevy had to go to the tire shop - on a wrecker! It was kind of cool to ride in the gigantic vehicle, but don't tell my car. This will not become a habit. 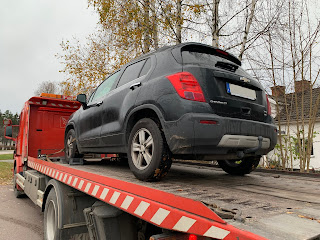 With the regular car back in business, I looked at the Kia and thought, "This car is so small, it will fit in the garage if I clean it out. Until next time I need it."

It didn't get that far. It only took a couple of days until a brake was stuck on the Chevy and I was back in the Kia.

And now gas prices have risen to a ridiculous level. 18.44 Kr/liter - that's very close to $8 per gallon. The Kia only needs like half a liter per ten kilometers (approximately 47 miles per gallon) so I won't have to drive it for long to make up for the purchase price.

The funny thing is, every time I come home now and see a tiny blue car in the yard, I think, "Who's here? Why is there a car in my yard? I don't even know anyone with a car looking like that." And then I remember, "It's my car. DUH!"

I wonder how long it will take for me to learn. Haha!